Experience the living culture of Nepal in the Netherlands! 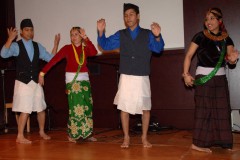 Nepalese dance and music
Anyone who has been in Nepal can agree: the country has a rich culture. Pull you from the lowlands in the south to the highlands in the north, you will come to many different peoples, each with their own clothing, dance and music. At many festivals throughout the year to the sound of drums and horns in the streets, sounds and squares and courtyards dances performed. They are refined, sophisticated and graceful and powerful, even aggressive, like the one the wrathful manifestation of the gods portray. Not only the parties are the scene of music and dance, including the daily activities are accompanied by sound, color and movement.Such as during planting rice in the fields and during harvest festivals. They sing to make the work easier but also to appease the gods and to be with a long life, well-being or a good husband blessed. Each nation has its own instruments, melodies, rhythms and sizes and has thus created their own songs and dances that reflect their daily lives. 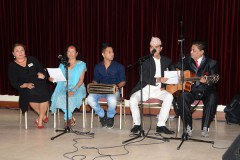